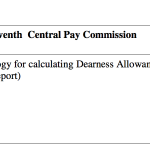 DA is the most important allowance in existing Pay, if you look at the current basic DA is higher. 7th CPC Basic fixation has biggest influenced with the DA value. For this reason, after 7th Pay commission implementation, Central government staffs are looking out for how DA would be available. In 6th CPC, everyone know how DA was calculated In the above formula 115.76 was … END_OF_DOCUMENT_TOKEN_TO_BE_REPLACED