Compulsory retirement after 30 years of service/on reaching 50 years of age? Views of employees Recently, the Central Government Employee’s Welfare Ministry released an announcement which has created panic and commotion among the central government employees. In the announcement it has been said that senior officials have to analyse the service record and decide whether … END_OF_DOCUMENT_TOKEN_TO_BE_REPLACED

Order for Merger of 50% DA, Retirement age news. Recently rumour mill went overdrive in social media with the following news that 1. Central Government decided to merge 50% DA with basic pay with effect from 1.1.2015. 2. It went on to say that age of Retirement will be on completion of 33 Years of service or at the age of 58 Years whichever is earlier. The 7th CPC is … END_OF_DOCUMENT_TOKEN_TO_BE_REPLACED 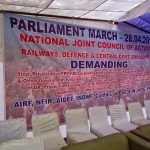 REPORT ON STAFF SIDE JCM MEETING WITH 7TH PAY COMMISSION ON 25TH FEB Joint Consultative Machinery for Central Government Employees No. NC-JCM/2015/S.C February 26, 2015 Dear Comrade The Standing Committee of the Staff Side, National Council has interaction with the 7th CPC on 25th Feb. 2015 followed by the Standing Committee meeting of National Council (JCM) with the … END_OF_DOCUMENT_TOKEN_TO_BE_REPLACED