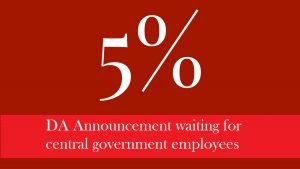 Dearness Allowance(DA) is depending on the cost of living adjustment allowance paid to government employees and pensioners.

As per 7th CPC recommendation, DA is expected to be 5% which is pending since July 2019. There is a chance to get announcement with in one or two days if so, employees would get arrears of three month or else it will be in next month probably. The much speculated 5% hike in DA may now come through as early possible.

As Festival season is so closer, but the government delaying the announcement of DA hike. we may expect at anytime as soon as possible and employees look forward the festival bonus from the government.