LTC to Some Countries 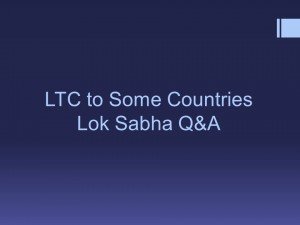 A proposal to provide Leave Travel Concession (LTC) to Government employees to visit some SAARC countries is in its initial stage of consideration. The details are yet to be finalized.

The purpose behind the proposal is to enhance people-to-people contact and bilateral ties in the SAARC region through increase in tourism in the region.

As per the Government’s order dated 26.09.2014, the Government has extended the facility of conversion of home town LTC to visit the states in the North East Region, Jammu & Kashmir and the UT of Andaman & Nicobar Islands for a period of two years up to 25.09.2016. This facility was first introduced in the year 2008.

Presently, no other proposal is under consideration for including more places under the conversion of Home Town LTC to anywhere in the country.

This was stated by the Minister of State for Personnel, Public Grievances and Pensions and Minister of State in Prime Minister’s office Dr. Jitendra Singh in a written reply to a question by Shri M. Raja Mohan Reddy in the Lok Sabha today