You are here: Home / RAILWAYS / Demand to extend and start new trains 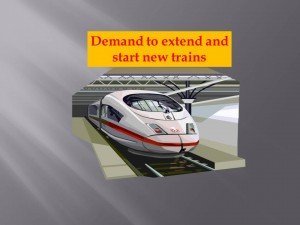 (a) whether there is a continuous demand to extend Visakhapatnam-Hazrat Nizamuddin Samata Express to Amritsar as daily train;

(b) whether Government would consider the long pending demand to start a new train from Junagarh to Varanasi; and

(c) whether Government would consider to start intercity train from Junagarh to Visakhapatnam, Junagarh to Durg and Junagarh to Bhubaneswar via Kesinga, Titlagarh and Sambalpur in Odisha?

STATEMENT REFERRED TO IN REPLY TO PARTS (a) TO (c) OF STARRED QUESTION NO. 198 BY SHRI BHUPINDER SINGH TO BE ANSWERED IN RAJYA SABHA ON 05.12.2014 REGARDING DEMAND TO EXTEND AND START NEW TRAINS.

(a) Requests have been received for extension of 12807/12808 Visakhapatnam-Nizamuddin Samata Express upto Amritsar and increase in its frequency from five days a week to daily. However, 18507/18508 Visakhapatnam-Amritsar Hirakud Express (tri-weekly) is presently available between Visakhapatnam and Amritsar.