Biometric Attendance System – Are the Central Government Employees Supporting or Opposing It? 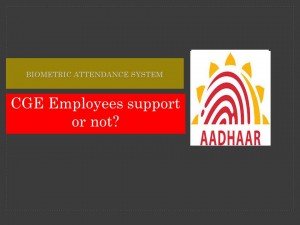 On the 21st of last month, the DOPT issued an order announcing its decision to implement the new biometric attendance system linking the employee’s Aadhaar number with his/her attendance. This system, according to the order, was to soon be implemented in offices of all the Central Government departments and their various agencies.

It is well known that the system has already been implemented in all the Government-run offices in New Delhi. The order says that the system will be implemented completely before the end of this year. And, before January 26, 2015, the scheme will be expanded to other regions of the country.

BIOMETRIC ATTENDANCE SYSTEM is the procedure of registering the attendance by placing the thumb imprint on a machine which captures the imprint and records the time of entry or exit from the office. In the moderate scheme, the employee has to manually enter his/her 6-digit Aadhaar number and then confirm his/her identity by fingerprint and iris-scan.

How do the Central Government employees feel about this new system that has become the talk of the town?

As far as we could see, about 95% of the employees are not greatly affected or troubled by this new system.

Once in a while, employees tend to be late to work due to unavoidable reasons like unexpected traffic hurdles or they might have to go out for their personal work during office hours. There is no denying these facts. But the system is a major irritation for those who are habitually late to work and go out on personal business during office hours. The change of system has hardly produced any reaction from those who are regular and on time at work.

But, there are no answers to the questions raised by employees who are forced to stay back to complete their work.Read more at – http://www.employeesnews.in/2014/11/biometric-attendance-system-are-central.html