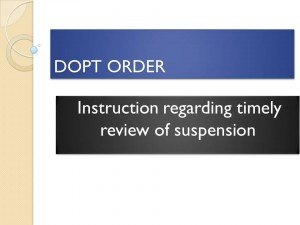 Rule 10 of the Central Civil Services (Classification, Control and Appeal) Rules, 1965, deals with the provisions of suspension. As per the rule, a Government servant may be placed under suspension, in the following circumstances:

(a) where a disciplinary proceeding against him is contemplated or is pending; or
(b) where, in the opinion of the authority aforesaid, he has engaged himself in activities prejudicial to the interest of the security of the State; or
(c) where a case against him in respect of any criminal offence is under investigation, inquiry or trial:

2. A Disciplinary Authority may also consider it appropriate to place a Government servant under suspension in the following circumstances. These are only intended for guidance and should not be taken as mandatory:-

3. In the first three circumstances the Disciplinary Authority may exercise his discretion to place a Government servant under suspension even when the case is under investigation and before a prima facie case has been established. Suspension may be desirable in the circumstances indicated below:-

(iii) serious negligence and dereliction of duty resulting in considerable loss to Government
(iv) desertion of duty;
(v) refusal or deliberate failure to carry out written orders of superior officers In respect of the types of misdemeanor specified in sub-clauses (iii) and
(v) discretion has to be exercised with care.

3. Rules 10(6) and 10(7) of the CCS (CCA) Rules, 1965, deal with review of the suspension cases. The provision for review within ninety day is applicable to all types of suspensions. However, in cases of continued detention, the review becomes a mere formality with no consequences as a Government servant in such a situation has to continue to be under deemed suspension. A review of suspension is not necessary in such cases.

5. All Ministries/ Departments are requested to bring the existing instructions on timely review of suspension and expeditious completion of disciplinary proceedings to the notice all concerned under their control.