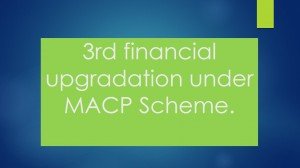 GOVERNMENT OF INDIA
MINISTRY OF RAILWAYS
(Railway Board)

The undersigned is directed to refer to AIRF’s letter No.AIRF/MACP/2014 (302), dated 07.10.2014 and to state the matter has already been consulted with DoP&T, the nodal department of Govt. on MACPS, and they have advised as under:

As regards the Order dated 31.05.2011 in OA No. 1038/CH/2010 (Raj Pal vs UOI) of Hon’ble CAT, Chandigarh which was upheld by the High Court and Apex Court, it may be stated that the Apex Court has not considered the issue on merit. The said SLP was dismissed due to insufficient explanation to condone the delay in the filing of the SLP. As regards implementation of CAT Order dated 9.5.2012 in OA No. 141/2012, the administrative Department was advised for implementation for the petitioners only subject to outcome of Review Petition in view of Contempt case. It may also be stated that generally the judgments passed by Hon’ble Tribunals/Courts are applicable/implemented to the specific case, unless there is any direction for similar dispensation to be extended to similarly placed persons. Hence, the above Orders pronounced favoring the applicants by the Tribunal/Courts and implemented on attaining finality or due to contempt or due to any other reason may be taken as exceptions/aberration.

In the matter, DoP&T have advised to maintain status quo with regard to the provisions for grant of MACPS benefits. It may be clarified that financial upgradations under MACPS would continue to be granted in the successive grade pay in the hierarchy of recommended revised pay band and grade pay as given in Section 1, Part-a of the first Schedule of the Railway Services (Revised Pay), Rules, 2008 and not in the promotional hierarchy, where functional promotion are allowed in the same Grade Pay, MACP benefits would also be regulated in the Grade Pay only.